Nick Craig talks about winning the YJA Pantaenius Yachtsman of the Year 2011 - 12. January 2012 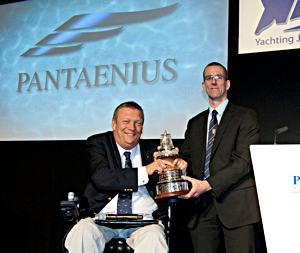 Nick Craig is presented the trophy by
Geoff Holt MBE

“Surprised, but delighted,” is how Nick Craig described his win at the annual YJA Pantaenius Yachtsman of the Year awards. The announcement was made at the awards ceremony at Trinity House, London on 10 January.

Craig overcame two household names to win the coveted title - Ben Ainslie and Dee Caffari, both former winners of the Yachting Journalists Association's highest award, were also nominated - and is arguably the first amateur dinghy sailor to win the award in more than a generation. He was presented the trophy by Geoff Holt MBE, the 2010 YJA Pantaenius Yachtsman of the Year winner.

Craig was nominated on the basis of an outstanding 2011 season, which included winning the OK Dinghy World Championship for the fourth time, the OK Dinghy National Title for the eighth time, the OK Dinghy Inland title for the sixth time, the RS400 National Championship for the fifth time, and the D1 Nationals at his first attempt. To cap off an outstanding year he won the Endeavour Trophy, the champion of champions event, for a record equalling fifth time. In his sailing career he has now won seven world titles and 22 national titles.

How did he expect to do compared with the other nominees? “I had an inkling that I had a chance because it's a non-Olympic year and Ben and Dee have won it several times before, but I was kind of hoping I wouldn't as I didn't really fancy giving a speech in front of all those legends.”

Then when his name was read out? “I thought, oh no, I've got to give a speech! But of course I was also very delighted.”

“It was a great day out. Very well organised, super food and wine and nice to have a day out with my wife, which doesn't happen often these days. It was also great to meet so many household sailing names who were all very personable, even if my wife did ask 'Who's Russell?' after meeting Russell Coutts.”

In his speech Craig thanked Mark Jardine and Sue Pelling for nominating him and everyone else for voting for him and amateur sailors up and down the country. After also thanking his own sponsor Gill and Pantaenius for sponsoring the awards, Craig then thanked his crews for putting up with him “being a grumpy git in a boat, especially the amazingly talented Toby Lewis, Fiona Clark, James Stewart and Keith Bedborough” with whom he has won 95 per cent of his titles. He also thanked his wife Emma “for putting up with all my dull stories of which way up the beat I went and all the time she's looked after the kids while I've been out sailing.”

Now that it has sunk in, “It feels very bizarre as I think Ben and Dee's achievements are well beyond mine. But I guess it was also a vote for the amateur sailors who put so much energy into the sport with so many active sailing clubs in the UK, with such popular winter pursuits going on right now and more competitive classes in the UK than in any other country. Amateurs have very different constraints, getting up at 5.30 to get two hours in the gym before work, driving miles to get to a decent open, back late on Sunday and then back to work. So it was fantastic that amateur sailing got such great recognition.”

“Just about everyone said how fantastic it was to see an amateur win and see this huge part of the sport recognised - Rodney Pattison seemed especially pleased because he won all his medals as an amateur. Ben was also very gracious and said well done and took an interest in what sailing I was up to - it would be great to see him win gold again in August.”

Craig works hard and plays hard, preferring to keep the day job and his sailing separate, but does he think it is important that amateurs get recognised in the same way as the professionals? “I think the pros ultimately deserve more recognition as they are simply better at the sport. However, amateurs shouldn't be forgotten as 99 per cent of the sport is amateur and there are some very talented amateur sailors who just can't put as much time into our wonderful sport.” 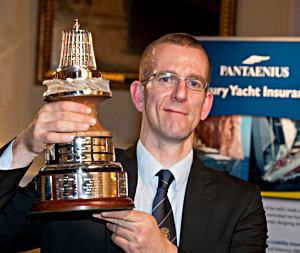 Does winning something like this compare to winning a championship? “I am probably a strange creature because I'll always prefer the buzz of a last race in a championship when it's down to the wire. But I felt real satisfaction in seeing amateurs recognised and it was a buzz seeing my name on the trophy mixed in with all the absolute legends.”

What ambitions has he got left in sailing? “I'd like to keep sailing the classes I love well and, as always, am loving the challenge of getting into some new classes. I'm really enjoying getting into the Merlin and will hopefully be back in the Finn for the Masters and I'd love to get a D-One.”

Craig places big demands on himself and those around him to compete well and to win, but what drives him to keep doing it at this level every year? “I just love competing, trying to sail better each time I go out and trying my hand at new boats. I love the sport, especially on a big breeze and waves day; the socials are great as well and no other sport combines the physical and mental demands so well. So my desire hasn't dimmed after 30 years of sailing, but I guess my body will slow down eventually. But I love it, by Monday afternoon I'm itching for my next weekend sailing fix.”

And then, interview over, the 2011 YJA Pantaenius Yachtsman of the Year was off to bed early to get up at 5.30 for some gym time before going to work.