You are here: okdia.org > features > 15 thomas on sailing ok

The Swedish OK Dinghy Association through Jonas Borjesson had the opportunity to sit down and have a chat with Thomas Hansson-Mild over a lunch in a wintry Stockholm. It turned out to be an interesting talk about Thomas's own OK Dinghy campaign, his view of what is required to develop your sailing and his thoughts on the OK Dinghy class in general.

Thomas is currently the only Swede that has the possibility to shine internationally in the OK Dinghy class. In 2009 he won the World championship in Kalmar, Sweden. Through his career he has won numerous World and European medals as well as countless Nordic and Swedish championships. Last year, he took a break from OK Dinghy racing but is now doing a comeback with full motivation. He decided right after the European Championships in Carnac in 2013 that 2014 would be a sabbatical year from OK Dinghy racing.

“I had been racing the OK Dinghy for the last 20 years and I really felt that I needed to get some distance and that it would be good to do something different.”

Over the years Thomas has raced in several different classes, including Star and Express. "In 2014, I focused on the Melges 24 which was really fun. Now, however, the hunger and motivation has returned to let the body get tearing in the OK Dinghy again.”

Despite the fact that 2014 was a year off in Thomas’s OK Dinghy career, the talk of the town still says that he trained more than most others in the class. He laughs and responds modestly, "Yes, I did not want to be too rusty at the Swedish championship at my home club [Gottskär, 30 km south of Gothenburg to where Thomas moved to a few years ago] so I kept doing some OK Dinghy sailing throughout the season.”

Thomas managed to win this championship after a magnificent finish with three wins on the final day. During the autumn, he then did even more OK Dinghy sailing with good training at home in Gottskär.

That Thomas is serious about his comeback is quite clear when we discuss the upcoming season. "The World championship in Puck in Poland in late July is of course the big goal of the season. It will be a Worlds with really tough competition. Several Danish and English sailors and "the usual suspects" will be competing for the medals. I want to be up there on the final day when everything probably is to be decided.”

“The Nordic championships in Præstø in Denmark will certainly also attract a strong fleet so I regard that competition along with the Kieler-woche in late June as general training before the World championship.”

When I, a little provocatively, ask Thomas how important it really is to win he answers something like, “Once you reached the top, the view from up there is so beautiful that you want to stay there”. After a few seconds of silence he laughs and says, “I guess some people really have a hunger to win no matter what it is. I guess that I have got that hunger.” 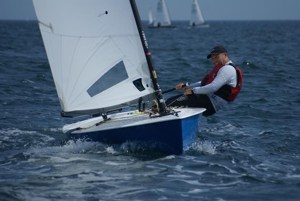 At the same time, he makes it clear that it is important to be realistic when facing a world championship. “At the Worlds, I often try to bring down my own expectations, not to put excessive pressure on myself and instead focus on my performance.”

Thomas's OK Dinghy career began in the late 1980s, right after finishing with the Europe dinghy. He moved into the OK Dinghy because it was the class in force in northern Sweden at the time. At home in Umeå, he trained a lot with Mats Borg and Olof Lindgren. Next door, in Luleå (only 260 km from Umeå!), there were several talented sailors, for example Kjell Nyström and Per Hägglund (World champion in 1989).

At that time, Thomas had a lot of role models in sailing, locally and nationally as well as internationally. There were role models or idols both in the OK Dinghy class as well as in other classes. He remembers that it was very exciting to do the first trips to regattas in the southern part of Sweden to compete against other OK Dinghy sailors. Even though he had quite some distance to travel to southern part of Sweden he does not remember those trips as especially burdensome.

“I sailed my first World championship in 1991 in Vallensbaeck in Denmark. I really did not have any track of what I was doing on the course but it was damn fun.”

Then, during the World championship in 1994 in New Zealand, Thomas was privileged to be invited home to Adrian and Nigel Mannering. “Adrian had been in the top ten in a World championship and I saw that tie there somewhere, and I think the idea began to grow that I wanted to reach the top. I started to sail more and suddenly I finished 13th at the world championships in 1995. That gave me an incredible motivation, which made it possible for me to put in a great amount of training the following years.”

Do you remember when you realised that you would be able to reach the top in OK-dinghy class? "Well, it was there sometime during the second half of the 1990s. I think I was 13th at the Worlds in 1997 again, and then at the Europeans in 1998 and at the Worlds in 1999 I suddenly sailed very well. I had found the keys and felt that it could be something, but I never dreamed about winning a World championship back then. When I finished fifth at the Worlds in Poland in 2000, my feeling was still that I was quite far from the top. Then, the following year, at the Worlds in Båstad I suddenly won my first medal (bronze) and since then it basically just moved on. "
When asked what enabled him to make the journey from the middle of the fleet to the top he says that it is difficult to identify one or two specific factors. “I think it rather was that everything fell into place. Greater tactical and strategic knowledge, the right material, better physique in combination with several years of experience and hard training made the penny drop.”

In 2007 when it was decided that Sweden would be hosting the 2009 World championships Thomas decided to go for it. “It was 100 percent commitment and focus to see if it could carry all the way, which it did”. He states that motivation and will really can help you reach your goals and delivers a classic statement from northern Sweden, “hungry wolves hunt best!”

What is most important for a mid-fleet performer to be able to approach the top? “Of course that differs between sailors. But I think everyone would benefit from analysing their own strengths and weaknesses. It can be really hard work to reach the top but the view up there is great. The first question you should ask yourself is whether you are ready to put in all the effort that is required to reach the top. If the answer is yes, then just go for it.”

Thomas also advises to really try to observe and analyse the way the best performers in the fleet sail and how their way of sailing differs from your own. “Keep a racing diary and analyse every race. Most training sessions should be devoted to speed training. Boat speed is a very important factor, work with it at all times. A few years ago I practiced reaches like a maniac since I felt I needed to improve these. Today, I am considered as one of the best at it.”

We are through our lunch and it is time for both of us to rush back to our respective jobs. I am curious to have Thomas thoughts on the development of the OK Dinghy class and the final question is what he considers to be the most important challenges for the OK Dinghy class in Sweden?

“Over the last years, there has been a fantastic development regarding manufactures of OK Dinghies and products but there is no one-stop shop. If there were dealers in Sweden who could sell the whole package, the OK Dinghy class would probably be perceived as easier to get into. It would most likely further increase the entries of talented sailors into our class.”

“I also think it is very important for the Swedish OK Dinghy association to develop a strategy. Why do we exist? How could we develop and stimulate our juniors? Should we reach for several top 10 sailors at the World championships, or should we be a social class? Choose a strategy, set clear goals and try to achieve these through actions. Then, OK sailing will soon flourish in Sweden again."

The interview is over and I wish we have had more time. There are so many areas that you would love to have Thomas’s views. Hopefully, there will be more opportunities in the near future. We say goodbye and the last thing I see and hear from Thomas is him laughing happily shouting, “See you soon on the water”.