You are here: okdia.org > press > 11 craig reflects on title

How times have changed. A little over seven years ago, no British sailor had ever won the OK Dinghy World Championship. It was a commonly held belief in the class that no British sailor ever would. They were just not up to the job, or jinxed by 50 years of history. Jim Hunt changed all that in 2004 with a decisive win on home ground at Parkstone on the UK’s south coast.

Then it was Nick Craig’s turn, winning the title in 2005, 2006 and 2007 to become only the third person to win three titles and only the second to win three in a row. This year in Largs, Scotland, Craig won it for a record equalling fourth time after one of the trickiest and closest world championships ever held.

In addition, Craig rises to the top of the ‘Best OK Dinghy sailors of all time’ list, overtaking class legend Jørgen Lindhardtsen (DEN).

Several weeks after the win, Craig reflected on the regatta. It was not the easiest of weeks, plagued by light and unstable winds and unusually high temperatures. Only seven out of the ten scheduled races were held after several long days on the water with very little to show on the scoreboard.

Craig said, “However, it was a very well run event. On shore side, it was one of the best events I’ve done. The family and friends events were organised by Sue Byers. There were activities every day, which meant my wife and kids had a great time which is very important.”

“It’s just a shame the wind didn't play ball. The sailing was very challenging with light, unstable winds, but the race team made the best of it so we raced in the best conditions available.”

What were his expectations going into it the regatta and how did that change during the week? “I was aiming to win but stayed pretty philosophical with the difficult conditions. I was sailing my best and if the wind was a bit random there wasn’t a lot I could do about it. I didn't open the week well with a 16th and then an 11th in race three but I knew it would be high scoring so I just kept plugging away.”

And the threats? “It was as expected – a great mix of experience in past World Champions Thomas Hansson-Mild (SWE) and Greg Wilcox (NZL) and new blood from Bartosz Rakocy (POL). In light winds I expected the German team to be fast which they were and in breeze the Aussies are fast.”

After finding great speed in years past to win three world titles with his Celidh mast and North sail combination, Craig has struggled with speed issues in recent years, after the rest of the world caught up. And to some extent this still dogged him in Largs. “The biggest challenge was my lack of pace in the very light airs. I was just off the pace upwind in sub-hiking conditions, which made life very difficult on the big course. I was having to start very aggressively and get all the shifts right to get any decent results in these conditions.”

The event had started on a low point for Craig. “My car, which was packed for the event and a two week family holiday, was stolen from the sailing club the weekend before the event and it made the week before very hectic with replacing the car, towbar, clothes, cot bed, credit cards and sailing kit as well as going to work. The biggest low point was how useless the police were – the thief phoned my wife on my phone so could easily have been caught.”

And once into the racing, he didn’t have the best start. “The opening race was pretty horrible for me. I got a great start but my pace was ordinary, I got on the wrong side of the last shift into the windward mark, and then got killed when the second reach turned into a run so I just scraped a 16th.”

However the championship was still wide-open going into the seventh and final race, held right on the time limit. Craig, who was in fourth place overall, needed things to go his way. “The highlight of the event for me was the first beat of the last race. I got a bit lucky - there was a shift and new breeze on the left which I was in so I rounded the top mark first with none of my competition in the top 20.”

“After that stroke of good fortune, it was still a tricky race. The wind stayed very light and I again struggled a bit for pace so slipped to fourth through the race whilst Greg Wilcox was coming through quickly. The run was painful as the leeward marks were moved to make it longer and the wind filled in from behind so at one point it looked like I'd be engulfed by the chasing pack. The fleet then inevitably split at the leeward gate but thankfully the wind filled in on my side so I clung on to take the title by just two points.”

What does a fourth world title mean to him? “It means a lot – winning it this time round was in many ways a lot harder than any other time as I’m sailing less so it’s harder to get an edge.”

“The rigs have also moved on a lot over the last few years and I’ve been behind as I’ve been sailing other boats and doing less sailing. But I’m happy that I've now got a rig that works well across the wind range. I've got no edge though, so I’ll be trying a few things over the winter to find that edge again.” 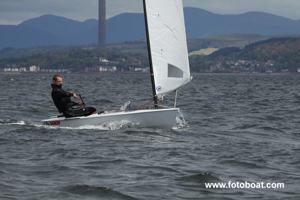 Craig is without doubt an OK Dinghy fanatic, but sees the need for the class to promote itself in a crowded market. “The class needs to keep playing to its strengths of great international racing and low cost close racing in a good fun atmosphere. It is hard to promote that in the UK because it is a very crowded market and there are big companies promoting their boats hard. But the OK has a unique mix of enjoyable racing that should see it continue to thrive.”

The class has lined up some great venues for the next few years. In 2012 the world championship is being held in Denmark, while in 2013 the class heads to Thailand for the first time, before travelling down under to Melbourne in 2014.

Craig is certainly game to try for a record fifth world title. “It would be fantastic and I will go for it, more because I love racing the OK Dinghy internationally than because five is a magic number. I hope to have many more years of great international sailing and beer drinking.”

“But I know it will be hard. There is some great young talent coming through the class as well as some very experienced hands who are tough to beat.”