Race 1 got underway with Richard Burton, one of the home sailors taking the lead from the start. Midway through the race, the wind dropped off, allowing Sam "Half Pint" Blocksidge to take the lead. Places changed constantly for the next lap, but Half Pint managed to hold his lead to the end leaving Richard Burton 2nd and Adrian "Rodney Trotter" Walker 3rd followed closely by Ollie Burrows taking 4th.

There was very little wind for the start of race 2, causing Sam Thomson to be OCS as he battled to make the start line in time, Eleanor Davies got off to a great start and rounded mark 1 first, with the lads chasing to catch up. By the 3rd mark, the wind had changed direction 180 degrees, allowing Richard Burton to take the lead, this was to be short lived, as he then decided to start showing off by removing his rudder, claiming he had got stuck in weed. This disastrous move allowed Rodney Trotter and Half Pint to sneak through to take 1st and 2nd place, leaving Richard 3rd and Eleanor 4th. Meanwhile a small dogfight was developing for 5th place between Ollie Burrows and Piers Smith with Upper Thames's Edward Crichton close behind.

Race 3 got under way with the pressure on Richard Burton, needing a win to secure the title. Rodney Trotter took the lead after an excellent first beat, followed closely by Eleanor, Half Pint and Richard. Rodney started to pull away, whilst Eleanor had a blonde moment and started heading for the wrong mark, allowing Half Pint into 2nd place. Things then stayed much the same until the last lap, when a thunderstorm and torrential rain swept in giving a slight increase in wind strength. The race officer very wisely finished the race promptly leaving Adrian Rodney Trotter Walker as race winner, and Youth and Junior Champion, with Sam Half Pint Blocksidge as runner up after taking 2nd place in the final race. Richard Burton retired on the last lap due to been worried about getting his hair wet which left 3rd place for Eleanor.

The day was finished off with a fish and chip supper followed by table tennis and pool tournaments. Big thanks must go to West Oxford Sailing Club for hosting and running the event, a great time was had by all. A special thanks must go to everyone who loaned and transported there boats to this event. 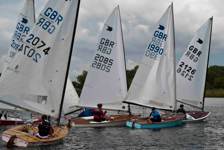 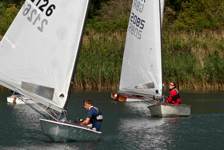 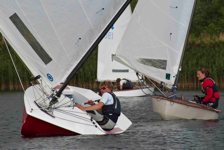