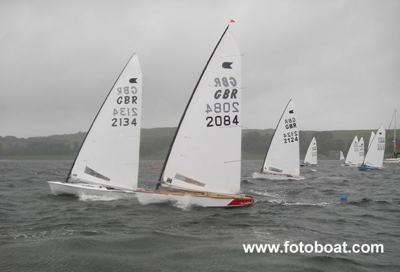 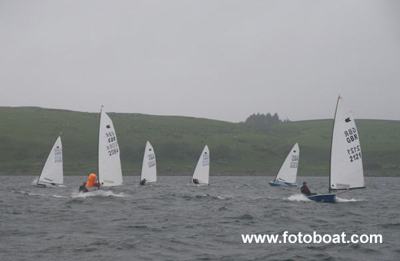 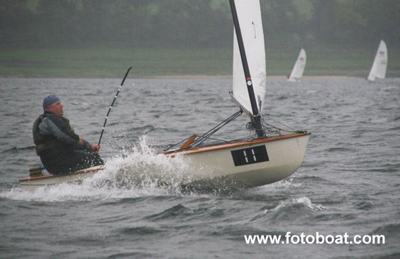 As a warm up to the Worlds later in the year, Largs Sailing Club hosted an open meeting on 21st & 22nd May. The hardy visitors were greeted by the splendour of the Scottish summer.

Saturday proved windy at Largs with an average breeze of around 25 knots and gusts well up into the mid 30's. Racing was confined to the more sheltered Largs Channel as a forecast of over 40 knots prevented the fleet heading North to the more exposed championship race area. The fleet was depleted due to the severity of the weather forecast however, 10 OKs braved the conditions and took to the water along with 6 RS200's. The Finn class who were due to attend decided it was all too much and didn’t turn up!

Nick Craig started as he meant to go on and led from the start and sailed off into the distance in the first race in a good breeze with Tony Woods & Keith Byers close behind. Woods broke his kicker on the run and could not get dead downwind in the rising wind, allowing Byers and Gavin Waldron to sail past. Byers gybed early on the run and in sailing by the lee allowed Waldron to edge past. The move paid for Byers as a strong gust hit both of them causing submarine impressions, but having gybed already Byers was left pointing in the right direction when control was regained. Woods also took advantage of the situation to reach in from the wing mark to regain third.

The second race started in a similar vein, minus Woods who went shore bound in search of spectra. Byers followed Craig in second with Waldron, Neil Goodhead and Andy Turner having a very close race for third place. By the end of the second beat Waldron had pulled away from Turner, however the crafty old man went high to meet a pressure front and surfed into third. Waldron learned from Byers in the first race and gybed before the pressure arrived. Turner struggled to control after a heavy weather gybe and went behind Waldron, who took second from Byers who lost ground unable to gybe when the pressure reached him. In a final blast Waldron capsized just after crossing the finish in a gust that claimed a number of casualties who were still on the run. Woods arrived back out after mending his kicker just in time to see the AP flag hoisted.

After food & entertainment in the clubhouse the more hardy in the fleet took to their tents for the night. The sensible went to nice warm B & B’s.

Sunday morning dawned with a drop in the wind and a hint of sunshine. Nick lead from the start but was closely chased by Tony Rich. Woods overhauled him to take 2nd with Byers 4th and Martin Bower taking a well deserved 5th after getting the tricky shifts at the windward mark right.

Race 4 was led by Woods at the first mark with Craig, Goodhead, Rich and Byers and Bower all very close behind. Woods fluffed his gybe at the wing mark and broke his tiller extention saving a swim. Bower also took a swim at the gybe. At the top of the second beat the wind rose to its strongest of the day, in excess of 35knots, leading to a very hairy run. Craig showed his class by massively extending his lead, with Byers also revelling in the strong wind pulling through to second, with Rich third. After a pause to allow a large ship with its tugboats through the race area the wind started to build as forecast and the racing was cancelled for the day allowing the fleet to pack the boats up early ready for the journey home.