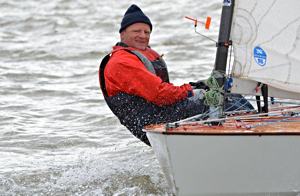 The Waldringfield Easter Egg was celebrating its 60th running this year and despite particularly inclement weather attracted 88 entries across eight fleets, including a small fleet of OK Dinghies. Though the racing was generally close and competitive, it turned into a matter of minimising mistakes which left Robert Deaves the clear winner with five race wins, mainly because he managed to stay in his boat and also sail the correct course each time.

The first race on Saturday was sailed in the lightest winds of the weekend with a painful run against the tide behind the island. Jonathan Fish thought he had it all sown up taking a sizeable lead; however that was reduced on the next beat and at the shortened finish Simon Cox nailed the final shift to cross just ahead. Contrary to tradition, the next race was started promptly with Fish and Cox again out for an early lead. Keeping up a different tradition, Cox then capsized, while Deaves gained from a big shift on the final upwind to catch Fish and just get the overlap before the final fetch to the finish to take the gun. The final race of the day started with Cox capsizing on the start line to let Deaves and Fish away for a nice lead. Fish, along with half the fleet, then missed out a mark and by the time he had re-rounded Deaves had a five minute lead. This left Tim O'Leary in second with Fish recovering to third. 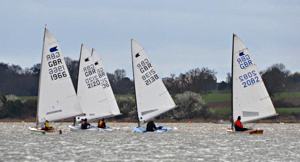 The wind had shifted for Sunday's three races, all back to back, with short beats across the flood tide and pretty much processional racing. Robert Bellfield led for much of the first race from Deaves, while Fish tangled a mooring rope and trailed in fourth. Cox went for the hat-trick on the next beat while Deaves wiggled past Bellfield on the tricky beat against the tide for a third race win. Fish led race four for a while, but Deaves got past downwind. He led round the leeward mark after an exciting gybing dual, only for Fish's toestraps to fail, leaving him breaking the surface to find his boat sailing away from him and his spectacles sinking to the muddy bottom. He finished the race in fifth but then called it a day. Cox also hung up his snorkels at this point. O'Leary led round the top mark in the final race with Deaves taking the lead downwind to extend for his fifth win. O'Leary held on for second place from Bellfield.