In Warnemünde, Germany, Kiwi pride was dominant in the final warm-up event prior to the 2008 OK Dinghy World Championship, which starts tomorrow, Tuesday 8th July. 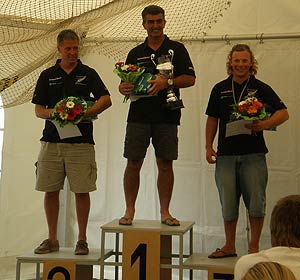 The 71st Warnemünde Week was convincingly won by Karl Purdie (NZL) after a great opening day in 8-20 knots winds and then managing to hold onto his points lead in the lighter and trickier conditions of the next two days.

Seven races were sailed on the same course area as the world's races will be sailed in a diverse range of conditions. Friday brought stiff north-easterlies and three tough races. The first race went to Mark Perrow (NZL), runner up in last year's worlds. Karl Purdie rounded the first mark in the middle of the 70 boat fleet and as the wind strengthened from 8 knots to 15 worked his way up to third place by the finish. In the next two races, the wind gradually strengthened and Purdie was clearly the fastest to take two bullets, the final one by a significant margin.

Lighter winds on Saturday brought some new faces to the front, with Luke O'Connell (NZL) sailing well to win the first race. As the wind started to drop still further Jorgen Holm (DEN) took race 5. Race six was then won by Alistair Deaves (NZL), a British sailor now living in New Zealand, after overtaking Greg Wilcox (NZL) on the final approach the to finish.

The final race on Sunday was also the practice race for the World Championship and was sailed in very light and patchy winds. O'Connell started well mid line and soon pulled ahead to build a useful lead to take his second race of the series and the Sven Lehn Memorial Trophy. Alistair Deaves snatched second place from Juliane Hoffman (GER) during the closing stages as the final beat was shortened in the very light winds.

O'Connell's win sealed the top four for New Zealand and with the Kiwi team taking six out of the top nine, they have sent a clear message to the rest of the fleet. Last year's world champion Nick Craig (GBR) didn't sail the full series and could only manage a 5-3-10-27 in the fickle conditions, while Kiel Week winner Thomas Hansson-Mild (SWE) counted a DNC but was near the front in most races. The only non-New Zealander in the top 6, Jorgen Lindhardtsen (DEN) placed well in the windy races, but dropped to fifth place overall after the lighter wind races at the end of the week.