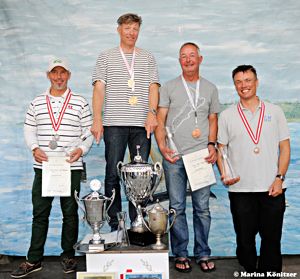 Day one had two races in very windy conditions.

On Day two, saturday, it was still windy and occasional showers went over. Three races where sailed and Jørgen Svendsen, after winning the European Championship just weeks ago, catched up to Bo Petersen with a 2-1-2 series for the day. Both ended up with 8 Points in total after 5 races.

On Sunday, the last day of racing, the battle between Bo Petersen and Jørgen Svendsen was full-on, when Bo won the first race of the day and Jørgen had a 6th, his worst race so far, the pendulum was swinging Bo's way, but in race seven Jørgen Svendsen won, while Bo Petersen had his discard with a 14th, as Petersen had already a 9th in race 4, that gave the advantage to Jørgen. Bo won silver, on same points as third placed Greg Wilcox, who had very solid 2-3 races on sunday.