The phrase, "it's never normally like this here", could never be more aptly applied as when it was used to describe the weather in Wellington Harbour over the long weekend of 3 - 5 Feb 2007 when 22 New Zealanders and 2 Australians gathered together at the Worser Bay Boating Club to contest the 2007 OK Dinghy National and Inter-dominion Championships.

Wellington has had somewhat of a reputation for big breezes and most were expected more of the same this year. But all the pie eating and toe-strap reinforcing that that fleet had done was to no avail. A high pressure system produced light winds and lots of sun. The wind in fact blew from pretty much every direction except the west. One club sailor, a member for 25 years, commented that he could only remember one occasion that he had ever sailed at Worser Bay in an easterly.

Race one was sailed in a light southerly. Matt Stechmann from Worser Bay made his intentions clear from the start after sailing a fine race to win from Luke O'Connell and Steve McDowell.

The wind increased slightly for race 2 with Andre Blasse from Australia leading throughout to take a well deserved win from Andrew Pardington of Wakatere.

A taste of the next two days was apparent during the start of race three, when the wind completely deserted the pin end of the line, with those at the boat end almost laying the first mark. Paul Rhodes had a good lead at the top mark which he held to the finish from Stu Bannatyne and Stechmann Race 4 on Saturday morning was a very light affair with half the fleet creeping up the western shore while the rest sailed off towards the hills.

John Hoogerbrug was the first to the corner shop on the right hand side and was rewarded with some lollies and a lifting breeze and rounded the top mark with a huge lead that he never lost. Credit must also go to junior sailor Josh Weeks from Napier and held on to a fifth place.

With the wind shifting more to the NW, the breeze was flicking around under the hills with puffs and holes and localized bends. Race 5 had about 7 leaders during the race including McDowell, Purdie and Deaves, but the winner on the line was Bannatyne after stealing the lead just seconds from the line. 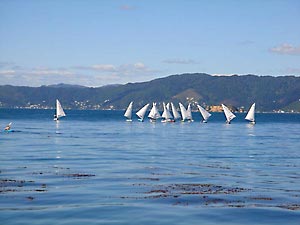 Light wind on the way home

Race 6 was a rather similar affair with 6 boats crossing the finish line within seconds of each other. McDowell won from Peter Scheuerl.

The southerly came back for race 7 and with it a dramatic drop in temperature. McDowell again sailed a good race to secure his second bullet of the day.

Going into the last day of racing it was still any ones game with McDowell holding a small lead over Stechmann and Bannatyne. This day would produce the trickiest sailing of the regatta. Race 8 was lead all the way by McDowell from Stechmann, Deaves and Ben Morrison, but on the final beat the wind died away leaving the leaders stranded. Meanwhile, a host of mid fleeters, led by a whooping and 'ye-haa'ing Mark Perrow, sailed around the outside of the fleet with Perrow taking the gun from Purdie. Not to be outdone by his son Josh, Marty Weeks sailed well and matched his fifth place.

After a short postponement for lunch, a stiff southerly kicked for race 9, giving Russell Wood the opportunity to show some of his upwind speed. By the run the breeze was already dying and shifting to the SW leading to some rather one sided beats; the beach preventing any more mark changes. Paul Rhodes won this race from Worser Bay Golden Oldie, Joe Porebski. 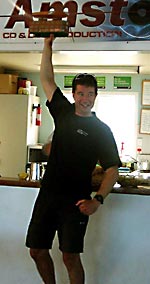 With one point separating the top three, the last race was the race for the championship. McDowell started badly in the light south-easter, while Rhodes rounded in second behind O'Connell. The wind all but died on the first run except for a wind lane along the shore. McDowell recovered to fifth up the second beat as the wind shifted back to the SW and then to third on the last run as the wind continued to back to the east and then the north. Rhodes crossed the line in second place, and took the title, just 20 meters ahead of a steadily closing McDowell. Mike Wilde kept his nerve to finish a credible fourth. An exceptional performance by newcomer Luke O'Connell from Napier though, who won his first nationals race after leading throughout.

And so a very close regatta ended, with only two points separating the top three places. Paul Rhodes, a very popular winner after 27 years in the class, walked away with his first National Championship Trophy and also the Inter-dominion Cup and the Veterans Trophy. Josh Weeks from Napier won the Junior Trophy.

Special mention must go to Matt Stechmann who won the class personality trophy for his work during the last year in promoting the class within the Volvo Ocean Race fleet and also to his contribution and enthusiasm which led to Wellington being nominated as the host venue for the 2010 OK World Championships.

Many thanks to our overseas visitors, Andre Blasse from Melbourne and Peter Wallace from Sydney.

This event formed part of the OK Summer Series and with double points available many positions have changed although McDowell still leads. The last event of the 2006-7 Series takes place at New Plymouth March 3-4 when the final results will be decided.