Charlie Cumbley (GBR) made the first day of his first ever international OK Dinghy regatta look easy as he took three straight wins on the opening day of the OK Dinghy Spring Cup in Medemblik, in The Netherlands. Sailed in a shifty 8-14 knots onshore breeze the 45 sailors from eight countries enjoyed a great day's sailing, if a little on the cold side.

All three races got away first time, though race 1 featured five OCS as the bunch at the pin pushed too hard. Cumbley started in the middle of the line and played the shifts well to the first mark to lead round in the first two races. He was pushed hard by both Jim Hunt and Nick Craig. It was slightly more open in the final race as Jørgen Lindhardtsen (DEN), led at the top. However Cumbley rounded sixth and was soon taking places offwind to round the downwind mark in the lead, which he held to the finish. Craig gained a lot on the final beat on the left to ensure Cumbley only won by the narrowest of margins – a couple of boatlengths.

Cumbley said it was anything but easy. It was absolutely not easy. I came here with no expectations or any idea of the pecking order. I did't know who was slow or quick. So it was nice to be up there and that's the the best I have sailed for a good while. Maybe because I was relishing the new challenge. Because I had no expectation I just tacked on the shifts and sailed my own race. Luckily I had a bit of pace downwind so that got me out of trouble.

Racing continues until Sunday. Light winds are forecast for Saturday and very strong winds for Sunday, so the fleet should see a little bit of everything. 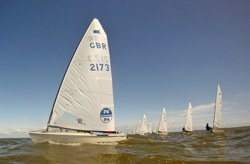 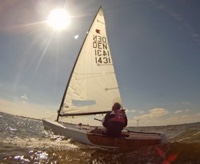 Charlie Cumbley has moved into a seven point lead at the OK Dinghy Spring Cup in Medemblik after three more races were sailed on Saturday. It was always going to be the lightest day and the fleet woke to a mirror like IJsselmeer with most forecasts showing very little wind. However, by 11.30 a light breeze was developing and the fleet was sent out for three very tricky races in a shifty and variable breeze that left many scratching their heads in frustration. 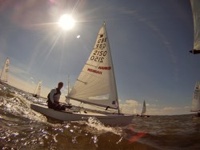 Rene Johannsen (DEN) dominated the first race to lead at the top mark and hold onto it throughout despite a strong challenge from Nick Craig (GBR). With the wind slightly increasing, Frank Strelow (GER) smacked the left hand corner in race 2, to lead at the top mark from Jim Hunt (GBR). Hunt took the lead offwind and held onto it until the finish, favouring the left side, which largely proved to be profitable all day. The final race was perhaps the trickiest with Cumbley emerging from the middle to lead round from the left and extend to win his fourth race of the series. A major left hand shift on the second upwind produced a lot of changes, with Bo Petersen (DEN) the biggest beneficiary moving from the 20s up to fifth.

The most consistent sailor today was Greg Wilcox (NZL) with three third places, to stay in third overall. He said, It was champagne sailing compared to what we were expecting. But it was very tricky. You think you are on winner and then you lose and then when it looks ordinary you have gained.

However, Hunt, had the best of the day with a 4, 1, 2. The defending champion from last year described it as a very tricky day, It was a very difficult day because there wasn't really enough pressure to do anything downwind. Upwind, you only needed to get bounced once and that was enough to lose a lot. There were increases in pressure but they were very hard to see coming. A lot of people were taking the pressure drop as a shift and having to tack back across later and losing twice. It helped today if you were in the right place at the right time to make the gains.

The OK Dinghy Spring Cup concludes Sunday with two more races and some very strong winds forecast. It should be a great finale to what has been a tough event.

Charlie Cumbley (GBR) has won the OK Dinghy Spring Cup in Medemblik for The Rüdiger Prinz Trophy at the first attempt after a win in race 7 sealed the event for him. Jim Hunt (GBR) finished second with Greg Wilcox (NZL) just maintaining third after a late charge from Rene Johannsen (DEN).

The forecast strong winds seemed to blow themselves out overnight leaving a choppy sea and 14-18 knots, which gradually reduced during the day. It was a grey day though with rain coming through later. Wilcox made the best of the first race to lead round the first triangle. Then Cumbley came through on the second beat to lead to the finish for his fifth race win and the overall win with a race to spare.

The wind moderated slightly for the final race with reduced visibility and grey skies. This seemed to suit Hunt, who rounded the top mark in the lead. Cumbley briefly took the lead downwind, but on the second beat Hunt favoured the middle while the rest took the right. Hunt crossed back with a nice lead again and led to the finish.

With Cumbley and Hunt a clear first and second, Wilcox took third by a very narrow margin after Johannsen and Bo Petersen (DEN) closed the gap with some consistent sailing.

It was a very tough weekend, sailed in some testing and tricky conditions across all wind ranges. Charlie Cumbley was the deserved winner of the Rüdiger Prinz Trophy. This is the first year that this trophy has been presented. It was created in memory of long time OK Dinghy sailor Rüdiger Prinz who died earlier this year. It is a half model OK Dinghy in orange, the colour of his boat. The Spring Cup was one of his favourite events, so his friends decided it would be a fitting tribute to his memory. A collection was also taken in the Brakeboer pub last night, where € 300 was raised to be given to his family's chosen charity.