Greg Wilcox (NZL) returns to the top of the final OK Dinghy World Ranking release for 2013 after another solid season. He climbs two places to retake the world number one position he last held in July 2012. Nick Craig (GBR) remains in second while previous world No 1, Jørgen Svendsen (DEN), drops to third.

It has a been a busy season following the early world championships in Thailand. World Champion Roger Blasse (AUS) moves up just one place to seventh, while Bo Petersen (DEN), who won the Europeans in Carnac in July, moves up three places to sixth. The European season started in May with the prestigious Spring Cup in Medemblik, which was won by Thomasz Gaj (POL) from the ever improving Richard Burton (GBR) and Andreas Pich (GER).

Thoughts soon turned to the upcoming Europeans in Carnac, France, but first there were three major regattas to complete. First up was the Nordic Championship at Herslev Strand Sejlklub. It was narrowly won by Thomas Hansson-Mild (SWE) from Wilcox and Christian Olesen (DEN). Kiel Week was next with former World Champion André Budzien (GER) winning from Petersen, with Wilcox again getting onto the podium in third. Wilcox then won Warnemünder Woche from Stefan Myralf (DEN) and Hansson-Mild.

The fleet then moved onto France. Just before the Europeans the French Champinship in Quiberon was used as a warm up regatta and Wilcox took his second straight regatta win. Myralf was again second, with Jørgen Lindhardtsen (DEN) third. The Europeans turned out to be a very light affair, but Petersen pulled out all the stops to win his first title in the class, from Myralf and Hansson-Mild, in what turned out to be a very tight and tactical week. 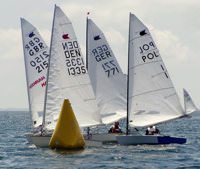 Then at the beginning of July, Hansson-Mild won the Swedish Championship from Wilcox and Myralf. In September Robert Deaves took his second British title, from defending champion Terry Curtis and Dave Bourne. Rüdiger Prinz (GER) won the Belgian Championship on Galgenweel in Antwerp from Yannick Laumans (BEL) and Ralf Mackmann (GER). Finally at the German Championship, on Lake Zwischenahn, Svendsen won from Budzien, who took the German title, and Martin von Zimmermann (GER) in a wide range of wind conditions.

As this goes to press, the next ranking event Sail Melbourne has just concluded and this will be included in the next release after the New Zealand Championships in April. A large fleet of OK Dinghies are currently sailing in Melbourne ahead of the Interdominion Championships after Christmas and also looking ahead to the next World Championships there at the end of 2014.

All this points to a class is in a pretty healthy state with 455 sailors from 14 nations counting at least one ranking regatta on the current release, with sailors ranging from 16 to 53 years old winning major regattas.