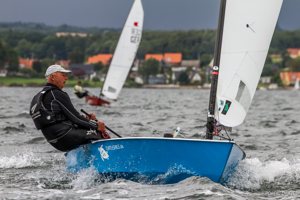 After winning the German OK Dinghy championship in October, Greg Wilcox, from New Zealand, has extended his lead at the top of the final OK Dinghy World Ranking List of 2017 to 100 points. Tomasz Gaj, from Poland, remains second, while Henrik Kofoed Larsen, from Denmark, moves up to third.

The new release includes 10 events as well as some corrections and adjustments carried over from the previous release in August. Some 523 sailors are now included, and the list keeps growing as more and more sailors from across the world discover, and in some cases rediscover, the joys and fun of sailing the OK Dinghy.

The biggest autumn event, as usual, was the Danish Championship, won by last year’s European champion, Bo Petersen. Wilcox was a clear second with Jens Lauge, from Denmark, fighting off some very good sailors to take third.

One of the growth areas in the class is the Low Countries with increasing numbers and interest, including many new boats in Belgium and the Netherlands. To reflect this, the ranking list now includes three events from the region. The ever popular Belgian Nationals, sailed on Lake Galgenweel in Antwerp, was won for the first time ever by a French sailor, Julien Dejugnat, with the first Belgian, Jacques Pirenne, in sixth place in the 33 boat fleet. Dejugnat also won the French southern national title, making it three titles in a year for him after winning the Mediterranean Championship in Bandol, in May, a non-ranking regatta, but the venue for the 2018 European Championship.

An impressive 46 sailors turned up for the Open Dutch Championship on the Oostersee. Jörg Rademacher, from Germany, won the event, but as only two races were sailed due to very light winds, the title was not assigned. Top Dutchman was Stephan Veldman in sixth. Then Malte Pedersen, from Denmark won the Belgian Autumn OK Regatta on the Lac de l’Eau d’Heure in southern Belgium.

The German championship was held at Flensburg at the end of September, and for the first time ever, Potsdam based sailmaker, Greg Wilcox, of Turtle Sails, won the title after many years of trying. He finished on equal points with double world champion André Budien with former European champion, Martin von Zimmermann, some way back in third.

At the end of the OK Dinghy’s 60th anniversary year it is looking in better health than ever. More new boats have been built than at any time since 1980, and with the next year’s world championship heading back to one of the classes favourite venues, Warnemünde, in Germany, it is looking like 2018 will be another great year for the OK Dinghy.