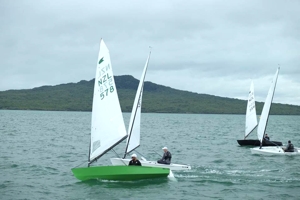 The first release of the OK Dinghy World Ranking List in 2018 is much the same as the last one in 2017. Greg Wilcox, of New Zealand, still leads from Tomasz Gaj, of Poland and Henrik Kofoed, of Denmark.

While most of the top places stay the same, there are 18 new sailors on the list, which now includes 519 sailors from 13 countries. All four events counted for this list were in New Zealand and Australia, before the European circuit begins next month.

The first event was the Go for Gold Regatta at Black Rock Yacht Club, Melbourne, in November 2017. Michael Horvath won from Folkert Jansen and Brent Williams. The Australia Nationals, held at Southport Yacht Club, on the Gold Coast in January 2018 attracted an impressive 42 entries, with Rob McMillan sailing a recently imported Ovington hull, from the UK, to a dominant victory over Wilcox and the defending champion Mark Jackson.

A few weeks later the New Zealand National and Interdominion titles were held at Wakatere Boating Club in Auckland. Luke O’Connell won a shortened series from defending champion Dan Slater and Ben Morrison. The event was viewed as practice for next year’s World Championship, which will be hosted by the club in February 2019.

The final event, at Turangi, was also won by O’Connell with straight wins from Alistair Deaves and Steve McDowell.

O’Connell’s results means he is back in the top 10 again, while Jackson drops out, from 10th to 12th. The biggest climber though is McDowell, up 17 places to 15th.

The European circuit opens, as usual, with the Spring Cup in Medemblik at the end of April. The next release will be after Kieler Woche in June and just before the 2018 World Championship in Warnemünde, Germany, where pre-entry closed at 99 boats. A huge fleet is expected at what is one of the class's favourite venues.