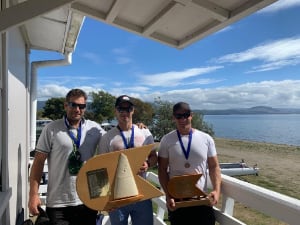 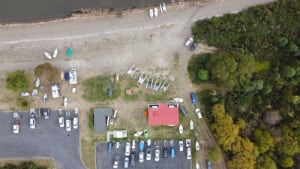 Every Ok sailor’s favourite regatta of the year was held over the weekend of the 27th-28th March with boats from everywhere turning up - Wellington, Waitara, Napier and Auckland all being strongly represented by elite OK Dinghy sailors from each region. A strong contingent arrived early for the traditional Friday night games and a BBQ.

Day one dawned with light winds and sunny weather. After a short delay, race 1 got underway in light and tricky conditions which would become the norm for the weekend. After a close battle, Luke “Colt” O’Connell took the race from the Lead Dwarf Steve McDowell, with Eric Wolf Rone in third. Race 2 was started very promptly after race 1, and was dominated by the Lead Dwarf, followed by the Wolf with Lightening in third. Race 3 again started immediately after the last boat finished Race 2 - once you had finished it paid not to stray too far from the start boat! Race 3 was another close battle, eventually been won once again by the Lead Dwarf who was revelling in the conditions, followed by Colt and Jono Rabbit Clough, who loves a light day on the water. The fourth and final race of the day – the all-important Tiki race - started in ever more challenging conditions, and with the usual feverish tension that is always present when the Tiki is on the line. The cunning old Wolf sailed a brilliant race to claim the honour of wearing the Tiki for the night, guaranteeing he would not be visiting central Turangi that evening, a move that has almost resulted in the violent deaths of several previous Tiki winners who went in search of the famed Tiki-Harpoon double (which has only ever been achieved once in the long and glorious history of the class).

Back on shore the boys were seen to be standing around in the lake like a bunch of mer-men, having a debrief about their day, while the club stalwarts laid on a wonderful BBQ. After dinner, Eric took a few lucky punters on a four-wheel-drive tour of the lake edge to round out the evening’s activities.

Day two dawned a little bit cloudy with a very glassy looking lake. The A-class cats seemed very keen to sail, while the OK sailors had other thoughts, until Graham Lambert, the Big G, came around the corner of the clubhouse in his race suit and that decided it. The fleet were all on the water for race 5, which was sailed in extremely light airs, and was taken out by Lightning from Colt and Sefton Powrie. Race 6, which would turn out to be the last race of the day, was won by Wolf for a brace of Tikis, while the Lead Dwarf took 2nd and with it the championship.

And so, another glorious chapter in the history of the Turangi International comes to a close. Stay tuned for the next instalment!